I am a software engineer by passion

Getting started with Redis and NodeJs

Redis is an in-memory key/value data store, which is used for caching purposes and fast retrieval of data. Redis can be used with any programming language but throughout this article, we'll use NodeJs.

Other features of Redis

Although Redis is mainly known for in-memory cache, it also provides a few other interesting features out of the box.

We'll not explore these features.

Node.js is an open-source and cross-platform JavaScript runtime environment. It is a popular tool for almost any kind of project! Node.js runs the V8 JavaScript engine, the core of Google Chrome, outside of the browser. This allows Node.js to be very performant. A Node.js app runs in a single process, without creating a new thread for every request. Node.js provides a set of asynchronous I/O primitives in its standard library that prevent JavaScript code from blocking and generally, libraries in Node.js are written using non-blocking paradigms, making blocking behaviour the exception rather than the norm.

In computing, a cache is a hardware or software component that stores data so that future requests for that data can be served faster; the data stored in a cache might be the result of an earlier computation or a copy of data stored elsewhere.

For every user profile request, the server has to read the profile information from DB then respond back to the client. Suppose our DB is far from the server, then, in this case, we would have latency in reading from DB.

This is just an example.

So, every profile picture will take on an average of 4s to display. To solve this problem, we have an open-source tool that can help us to cache the responses. 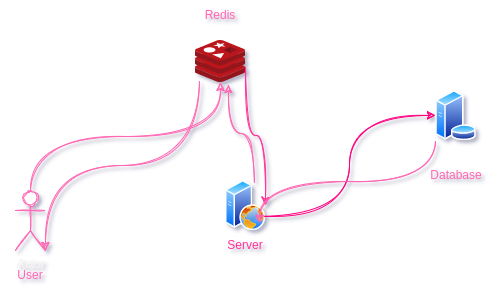 On the above diagram. you can see that we have introduced Redis as a cache DB. So, whenever we get a request from the client. We first check the user id into Redis and ask whether we have a cache for that user id or not. If it has the cache, then it'll return the response immediately. Otherwise, the server will fetch the data from DB and it'll also store the data into Redis.

Accessing data from Redis is about milliseconds of tasks. So, it'll dramatically reduce the server latency.

Connect to the redis

Now, you are ready to get and set data to and from Redis.

There is more in Redis than just get/set you can explore https://redis.io/commands.

The implementation demo is available in here.

I have used delay to simulate heavy computation task and i have used sleep to simulate acynchronous long running task, such as fetching resourses from an upstream server.